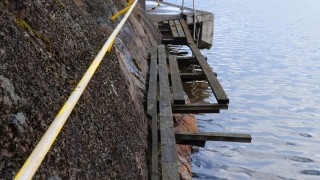 BioBio, a Chilean news agency, reported today that professional skiers J.P. Auclair and Andreas Fransson are confirmed dead after an avalanche slid 700 meters off of Monte San Lorenzo, located on the border between Argentina and Chile in Patagonia.

Salomon and Armada, the sponsors for Fransson and Auclair, respectively, confirmed the reports that both athletes are missing.

BioBio reported that Auclair and Fransson were climbing Monte San Lorenzo with photographers Bjarne Salen and Daniel Ronnbak, both from Sweden. Salen and Ronnbak are unharmed. An emergency call via satellite phone was placed on Monday afternoon notifying authorities of the avalanche and the missing skiers. The group was filming a new project, which according to Fransson’s Facebook page, was a new webisode series called Apogee Skiing.

The region the group was climbing in is very remote and mountainous. BioBio states the location is 18 hours from the nearest city, and a two hour flight just to the base of the trail. A rescue operation takes up to 13 hours to reach the area of the avalanche.

In an interview with Armada, Auclair said he met Fransson in Chamonix about three or four years ago. “He was excited to share all his knowledge and his approach to skiing he was doing in Chamonix,” Auclair said in the interview. “He had lots to teach me and I had a lot to learn from skiing with him. Ever year, we try to make a bit of time to ski together, but it was always hard with conflicts of schedule and trips. This year, we decided to do something more official and decided to dedicate time to ski together every year.”

This story will be updated as more information comes in.

"I’ve spoken with Stefan Palm, an instructor in the SBO Svenska Bersgguides Organisationen, who passed me a few details about the tragic accident that claimed the lives of Andreas Fransson and JP Auclair.

What is known is that on 29th Sept at around mid-day in Patagonia, Andreas Fransson and JP Auclair planned to climb and ski the San Lorenzo couloir on Monte San Lorenzo, a 3,706 meter peak on the border of Chile and Argentina in the Patagonian Andes. About two-thirds of the way up, they were swept by a snow release very high above them that carried them about 700 meters down the couloir on to a heavily crevassed glacier.

Filmakers Bjarne Salén and Daniel Rönnbäck were in place to film the descent when they saw the accident happen but were separated by four hours of heavily crevassed terrain. Using their radio, they tried to contact Andreas and JP but there was no answer to their calls. Bjarne and Daniel then used their satellite phone to call Swedish mountain guide Per Ås (in France) and Rolo Garibotti, an Argentine climber who is an authority on the area (currently in Italy) who both advised them to stay put due to the immense and dangerous glacier, cloudy weather, limited time, as well as the difficult situation they were in. Per immediately called his colleague Stefan Palm who has a large network in Chile.

Garibotti then contacted a number of people and by luck Chilean climber Armando Montero happened to be at the trailhead of San Lorenzo, about to start an ascent of the peak. Montero returned to the closest town - Cochrane, Chile - and informed the local authorities. Once the rescue was started Montero and his partner headed back up the mountain, to meet Bjarne and Daniel, whom they met that evening at their base camp.

Stefan Palm also contacted Joaquin Oyarzun, from Heli Ski Guides, a Chilean outfit, to try to organize a helicopter rescue but found that the closest heli was 200 miles away and wouldn’t be able to leave unit the next day, 30 Sept.

Fast action by the authorities, police and military ensured that on Tuesday, 30 Sept at 9:00a, a helicopter flew over to the accident site. The helicopter stopped at basecamp and picked up Montero, an experienced guide and mountaineer. Because of the severe terrain the helicopter was unable to land but nevertheless flew quite low and were able to spot both climbers. Both pilot and Montero who were in the heli reported they had no doubt that both skiers were dead and had probably died immediately. A rescue attempt was therefore called off.

Because the accident occurred on the Argentinian side of the mountain the body recovery is now in the hands of the Argentine gendarmerie. On Tuesday morning a team of five Argentine gendarmes set off to try to reach the bodies. Because of the remoteness it is unlikely that a foot mission will succeed, but there is hope to secure a helicopter later today.

I've also received news that Bjarne and Daniel are now safely off the mountain.

Thoughts and prayers go out to the family and many friends of these two beloved skiers. Special thanks go to Armando Montero and his partner, as well as to Alvaro Herrera, the captain of Carabineros of Cochrane, and to the rest of the authorities that have helped so far."